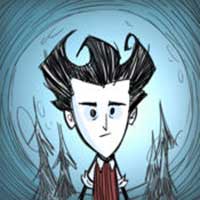 A mobile edition of the survival adventure game created by Klei Entertainment. The action of Don’t Starve: Pocket Edition takes place in a randomly generated wilderness, where the protagonist, a scientist named Wilson, was teleported by a deceitful demon. The hero has to use his knowledge and skills to survive in a hostile environment full of wild beasts, and find a way to go back home. The gameplay emphasizes the survival aspects, and the player’s main tasks involve building shelter, acquiring food, sustaining fire, as well as producing clothes and useful tools. The game was designed in the characteristic cartoonish style and is full of humor and pop-culture references. The mobile edition is virtually identical to releases on other platforms — the only major difference is the implementation of touch-based controls.

Play as Wilson, an intrepid Gentleman Scientist who has been trapped and transported to a mysterious wilderness world. Wilson must learn to exploit his environment and its inhabitants if he ever hopes to escape and find his way back home.

Enter a strange and unexplored world full of strange creatures, dangers, and surprises. Gather resources to craft items and structures that match your survival style. Play your way as you unravel the mysteries of this strange land.

Uncompromising Survival & World Exploration: No instructions. No help. No hand holding. Start with nothing and craft, hunt, research, farm and fight to survive.

Randomly Generated New Worlds: Want a new map? No problem! At any time you can generate a new living and breathing world that hates you and wants you to die.